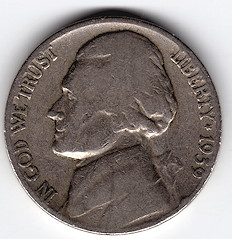 Look at that. Isn’t it beautiful? Well I think so. It represents a return to The Way Things Are Supposed To Be. All right… eye of the beholder and all that. Let me tell you about it, and why it’s beautiful to me.

It was handed to me in change a few days ago. It’s a 1939 Jefferson Nickel, minted in Philadelphia. I know this because it does not have a mint mark on the back, and during this period, the absence of a mint mark indicated a Philadelphia origin. It’s pretty early for a Jefferson nickel – they started making them in 1938, though 1939 is the earliest you’re likely to see in circulation.

Now we get to the important fact about this coin: It’s worn; very worn. The rim has worn down into the tops of the letters that encircle Thomas Jefferson’s head. The fine details on the image of Jefferson have been completely eroded. It bears the battle scars from over seven decades of earnest commerce. And that’s a good thing.

Let’s go back to what change looked like when I was a kid. It was not unheard of then to find a Buffalo Nickel in circulation, though they’d gone out of production several decades earlier. When you came across one in circulation, it invariably lacked a readable date, as those coins suffered from a design flaw that made the date susceptible to wearing off relatively quickly. It was also not unusual to find an old, heavily worn Standing Liberty Quarter in circulation, even though they’d gone out of production nearly four decades earlier. Even aside from the coins whose designs had changed, it was an everyday occurrence to come across extremely worn Lincoln Cents, which have been in production since 1909.

But something happened in the 1960s that profoundly changed the makeup of our circulating coinage: The price of silver got too high. How high is “too high”? Well, so high that the value of the silver in a dime was more than ten cents. Likewise, the value of the silver in a quarter was more than 25 cents. As a result, American dimes, quarters, and half dollars, all of which were made out of 90% silver, began disappearing from circulation. Coin dealers, speculative investors, and ordinary citizens were pulling them out of their change purses and stashing them away, never to be spent again.

It is largely forgotten nowadays that we actually had a little crisis on our hands in the mid-60s – we had a severe shortage of circulating coinage. The mint did a couple of things to address the situation. One was that they minted a record number of nickels in 1964, since nickels did not contain silver. Then as now, they were made out of nickel and copper and were in no danger of being intrinsically worth more than their face value. But the big change was that they completely changed the composition of dimes, quarters, and half dollars. Starting in 1965, dimes and quarters were made of nickel and copper. Half dollars had their silver content reduced to 40%, though they changed again to a nickel-copper composition in 1971.

Let’s not leave pennies out of this equation either. In 1959, to mark the 150th anniversary of Lincoln’s birth, the reverse of the coin was redesigned, with an image of the Lincoln Memorial replacing the curved wheat stalks that had graced Lincoln Cents since 1909. This likewise led to people hoarding wheat cents on a grand scale, with the result that they had become uncommon in circulation by the 1980s.

The result of this sudden massive turnover in our circulating coinage was that one rarely saw very worn coins in daily change. A couple of generations have grown up and grown old thinking that this is completely normal.

We are finally getting back to the point where circulating coinage looks the way it’s supposed to – the way it historically always did look before the silver market convulsion of the 1960s. Frankly, I view this as a metaphor for our cultural obsession with youth. Our coinage became young just as the demographic center of our population became young. Both have now aged considerably, yet they both have a potential value.

So take another look at that 73-year-old nickel at the top of this post. It’s worn down, scratched up, and it has seen better days. Then put it next to a shiny, unblemished 21st century nickel and read what it says on the back. That’s right – they’re both worth five cents. But if that old nickel could speak, it would tell you ten thousand stories about bygone vending machines it visited back in the day, juke boxes it brought to life, children’s piggy banks it sat in until a sudden splurge on penny candy, and pay phones on darkened street corners into which it was desperately thrust at odd hours.

For me, this has always been part of the magic and romance of beholding artifacts from earlier times. Whether we’re talking about a 1939 nickel or an amphora from ancient Greece, we’re in contact with the past. We’re interacting with a clue that has passed from the hands of our ancestors to us, and we’ve been given an opportunity to search for insight. So the next time you reach into your change purse, remember that those aren’t just coins; they’re artifacts from another world that might have something to teach you.
Collapse