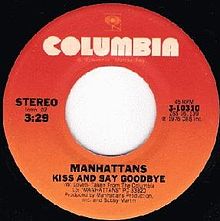 If you’re not familiar with the term – Answer Song – it’s a song written as a response to another song. They’ve been around for a long time. Woody Guthrie’s “This Land is Your Land” is said to have been an answer to “God Bless America.” The Elton John/Bernie Taupin song “Mona Lisas and Mad Hatters” is, at least in part, an answer to “Spanish Harlem.” Perhaps the most famous example of an answer song in rock & roll is Lynyrd Skynyrd’s “Sweet Home Alabama” which is not merely an answer, but a retort, to Neil Young’s “Southern Man.” There are many other examples of answer songs, right up to the present day, but I think you get the idea.

I bring this up because there’s an answer song that needs to be written, or perhaps I should say, that should have been written a long time ago. The song in question is “Kiss and Say Goodbye” by the Manhattans. It hit #1 on the pop charts in 1976 and still turns up on oldies stations from time to time. In case you can’t bring it to mind on such short notice, the lyrics, in part, go like this – and as you go through them, remember that this is someone dumping their lover, and ask yourself how you might respond if you were the one being dumped:

[Spoken] This has got to be the saddest day of my life
I called you here today for a bit of bad news
I won’t be able to see you anymore
Because of my obligations and the ties that you have
We’ve been meeting here every day
And since this is our last day together
I wanna hold you just one more time
When you turn and walk away, don’t look back
I wanna remember you just like this
Let’s just kiss and say goodbye.

We’ve been meeting here so long
I guess what we done, oh was wrong
Please darlin’, don’t you cry
Let’s just kiss and say goodbye…

Let me start here: This guy is some piece of work. He’s dumping her, and he tosses out “…Because of my obligations and the ties that you have…” Yeah, he’s giving her equal blame for this breakup, apparently without discussion or debate. I wonder – would she agree that the “ties” she “has” are reason enough for breaking up? I’m skeptical. Oh and then, he tries to rise above it all with “I guess what we done, oh was wrong…” – implicitly lecturing her on her morals; quite a stunt in light of the fact that “We’ve been meeting here so long…” The subtext I’m reading into this story is that the guy got caught by his wife after carrying on a lengthy affair, and he’s opted to stay with the wife and lose the girlfriend. But instead of just dumping her and moving on, he has to make this big speech and cast himself as some kind of tragic romantic. Seriously, this lady is better off without him, but that still doesn’t excuse his behavior. One more thing – later in the song, he offers that “Maybe you’ll meet another guy.” Is he really dumb enough to think that these words are consoling when you’re hearing them from someone who’s just dumped you? Or is he just looking for an exit line to get himself the hell out of there? Considering that those words come right near the end of the song, I think the question answers itself.

One more question: Does this approach to breaking up work, ladies? I ask this only as an academic inquiry, as a student of the human condition.
Collapse