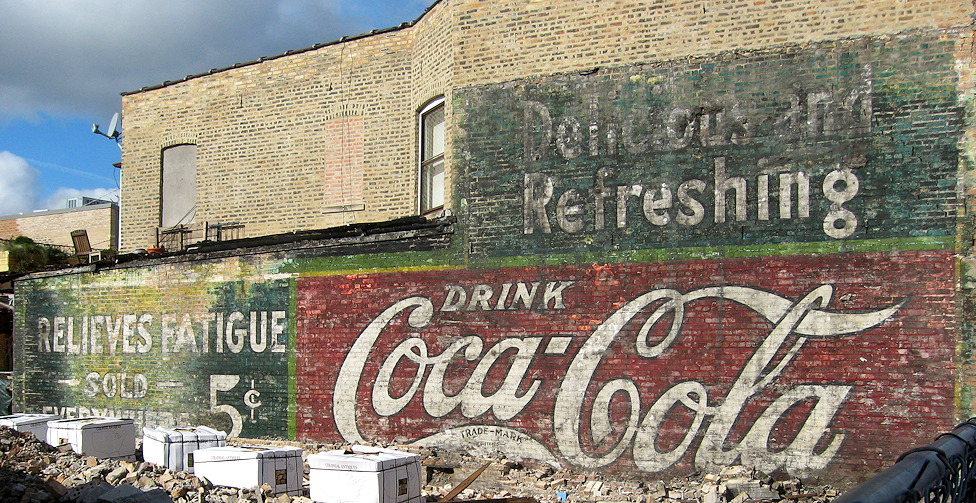 This sign is a surprise that appeared recently in my neighborhood. As you might guess, it came to light as the result of a building demolition, which revealed this remarkably well preserved Coca-Cola sign. If you want to see it, it’s on the side of the building located at 5438 North Clark Street in Chicago.

You might wonder what year the sign dates from. Well… it’s hard to say, at least for me. The building certainly dates back to the late 19th or early 20th century. One clue is the fact that Coke is being advertised here as costing five cents, but that turns out to not be a very good clue. According to my research, a bottle of Coke cost five cents at least as far back as 1905, and it still cost five cents at least as late as the mid-1940s. To my eye, the sign seems clearly to date from before World War II, but it would take a better advertising scholar than me to narrow it down any further.

In any case, it’s certainly rare to see an unrestored painted Coke sign this old in such excellent condition. I can’t help but wonder whether a new building will soon be built on the now-empty lot next to it. Perhaps this sign will soon be covered up again, to be rediscovered again a century hence. In the meantime, we will appreciate this little piece of early 20th century Americana that is now (presumably briefly) on public display.

Update — My friend Vince did some research and reports that this building was built in 1915. Gratzi Vince!
Collapse