Last week, my friend Alison and I spent several days in Branson, Missouri. You may well wonder why. Branson, after all, is popularly thought of as the cheesiest of tourist traps (at least among the hip northern urbanites with whom I typically associate). In an episode of The Simpsons, Branson was memorably described as “Las Vegas if it was run by Ned Flanders.” Yet we went.

I can’t speak for my traveling companion, but my reason for going began with simply wanting to take a road trip to somewhere I’d never been. As far as Branson’s aforementioned reputation, I decided that this would be part of my mission for the trip – to drink deeply of whatever I found in that metaphorical cup called Branson. So I arrived in town expecting, nay seeking, cheesy fun. I found it there, plus a few unexpected attractions that belied the town’s reputation.

Branson is in southwestern Missouri near the Arkansas border, so make no mistake – when you’re in Branson, you’re in The South; you’re in The Bible Belt. Its population is just a little over 10,000. I mention that number chiefly to contrast it with Nashville, Tennessee, the city to which it is often linked culturally. Nashville, despite feeling like a spread-out small town, has over half a million residents, so the cities aren’t really comparable at all. Contrary to what one might expect, though, there is a far larger and more diverse assortment of entertainment in Branson than there is in Nashville. But while one might conceivably become lost in Nashville and be in the utterly wrong part of town, it’s pretty much impossible to be lost in Branson for more than a few minutes.

Most of the theaters and other tourist attractions are on (or just off of) state route 76, which runs east/west through the entire town, so once you’ve found route 76, you’re all set. The roster of attractions on that road includes Dick Clark’s American Bandstand Theater, Andy Williams’ Theater, the Dinosaur Museum, the Hollywood Wax Museum, the Titanic Museum, and many, many others.

Ah, the Titanic Museum… If you’re looking for cheesiness, look elsewhere – unless, of course, you consider anything having to do with the Titanic to be cheesy. The Titanic Museum boasts the largest collection of genuine Titanic artifacts in one place anywhere in the world. After spending several hours there, I believe them. If you’re interested in the subject, you simply have to go there. Yes, you. The place is big, filled with fascinating details, and very well designed, containing a maze of diverse galleries covering different aspects of the Titanic story, as well as a full-scale reproduction of the grand staircase that you are free to walk upon. Here’s what the front of the building looks like (Alison not included): 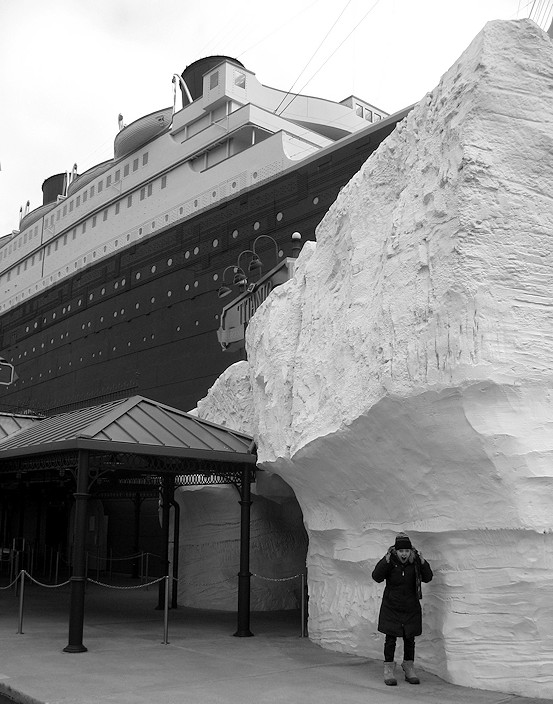 OK, so maybe the exterior of the Titanic Museum is a little cheesy.

Our next stop was the Stone Hill Winery, where we enjoyed a tour and took part in a tasting of about ten different beverages. Understand this: For years, I’ve had to hear about my friends going on vacation and visiting wineries and taking part in wine tastings, but I’d never done it myself. Well folks, I just want you to know that I’m cool now; I’ve done it. I’m part of the In Crowd.

And heck, I thought, why not take the tour? Admission was free; the tasting was free. Obviously, they assume they’ll make their money when you buy a few bottles of the wines you’ve just tasted. O, how little they know me! I walked out no poorer than when I walked in, though I did enjoy the tasting. In fact, let me toss out this bouquet – the Stone Hill Cream Sherry was stunning. They trumpet it as their signature product, and they’ll get no argument from me. I should also note that, at 19% alcohol content, it packs a bit more pop than their excellent wines.

The most utterly Branson-ish show we saw was The Baldknobbers Jamboree. It’s a music & comedy variety show that’s been running in Branson since 1959. It’s produced by, and still stars, members of the same local family. It is indisputably one of the shows that built Branson into what it is today.

Having said that, the show itself was a mixed bag. A sharp distinction must be made between the musical segments and the comedy segments. The music was consistently well done and very polished, with excellent singers backed by a slick country band. The worst thing I could say about the music was that some of the soloists were far better suited to being back-up vocalists; their harmonies were tight as a drum, but their solo work sometimes lacked the dynamism one might wish for. But I quibble.

The comedy was another matter. It was consistently dreadful. As the show progressed, the reasons for this became clearer. The two older gentlemen doing most of the comedy have been doing this show for many years. Most significantly, one of them is the show’s producer, so he’s not going anywhere; nor would he have any hope of appearing on the professional stage were he forced to compete in an open audition. The other comic, i.e., the one with some actual talent, seems to have been doing this for too long, such that he’s gotten into a slew of bad habits that just kill the comedy time after time. Look, it’s country corn material; I accept that. But even country corn has a way that it works, and this duo has lost its way.

Even taking these problems into account, I’m very happy that we went. Hey, it’s a Branson institution, and we went there to discover Branson. The music was better than what I was prepared for; I was left with the impression that the musical director has high standards and they let him do his thing, and that the director of the comedy bits (if there is one), is somebody else.

I should also talk about the show’s audience, because they are a key part of understanding the Branson ethos. The audience was about 75% aged 65 or older, mostly southern, and about 100% white. The show played right into their mindset. An entire musical medley was devoted to the various branches of the U.S. military, and all veterans in the audience were asked to stand up for a moment to be honored in song. There was also a segment of southern gospel music that was introduced with an explicit reference or “our lord and savior Jesus Christ.” One more example: right before intermission, one cast member made an announcement about the various souvenirs for sale at the theater, including “cookbooks for the ladies.” So this show, and I’m sure many others in Branson, was aimed squarely at white Christians with traditional values. Whether this reflected the true sentiments of the show’s producers or whether it was a cynical choice meant to pander to the audience, I do not know. Some bloggers might describe this scene using far more pejorative descriptors, but I seek only to describe the scene and leave any further comment or judgment to my readers. I will say this: It was completely consistent with everything else I saw and heard while I was in Branson. Just so you know.

Postscript about the Baldknobbers show: The audience may have been entirely white, but the cast wasn’t. There was one non-white cast member – a Japanese-American man who played the fiddle and performed a noteworthy musical solo as a yodeler. Ten points to the Baldknobbers for cultural diversity.

On our last day in Branson, we got off the route 76 Strip and explored downtown. The main shopping district is the Branson Landing – a stretch of several blocks closed to automobiles. We walked the entire length of it and had fun, though we weren’t there to shop, so the area’s retail options were largely wasted on us.

A few blocks away, we had a far more interesting time exploring the various flea market emporiums in the downtown area. Most of them consisted of room after room of 20th century junk – the kind of stuff that needs to be examined closely in order to find the interesting shit. The most memorable of these shops was one that specialized in Victorian style materials; at least that’s what it promised. What it actually delivered looked like the afterbirth from the unholy union of Anne Rice and Walt Disney. I will leave the rest to your imagination.

We decided to splurge on one fabulous dinner to mark our final night in Branson. After asking around, we settled on the White River Fish House. It actually floats on Lake Taneycomo at the southern end of the Branson Landing shopping area. It is huge, with high ceilings, old wood everywhere, and a profusion of nautical themed antiques (or faux antiques) on every wall. More importantly, the food is divine. I enjoyed a generous serving of spicy breaded shrimp that was served with a blackened catfish étoufée and an iron skillet of freshly baked cornbread. This was perfectly complemented by an exceptional glass of Pinot Grigio and followed up with a most excellent warm bread pudding with caramel sauce. I’m going to take a break from typing now and salivate for a moment.

The drive between Chicago and Branson is a little over 550 miles each way, so it’s a full day of driving, particularly when the person you’re traveling with doesn’t have a driver’s license. But I’m not complaining. We had a great time! I’d love to go back there some time when it’s actually tourist season. You see, we avoided the crowds and saved a lot of time and money by going there in February, but the trade-off was that many of the live shows were on sabbatical until March or April. For example, we’d have bought tickets to “The 3 Redneck Tenors” in a heartbeat if they’d have been performing. No, I’m not making that up.

In closing, there are a couple more photos I’d like to share. The first one was taken outside a restaurant on the route 76 Strip. We didn’t eat there, but Alison insisted we pull over for a photo. She’s the one at the bottom of the picture. 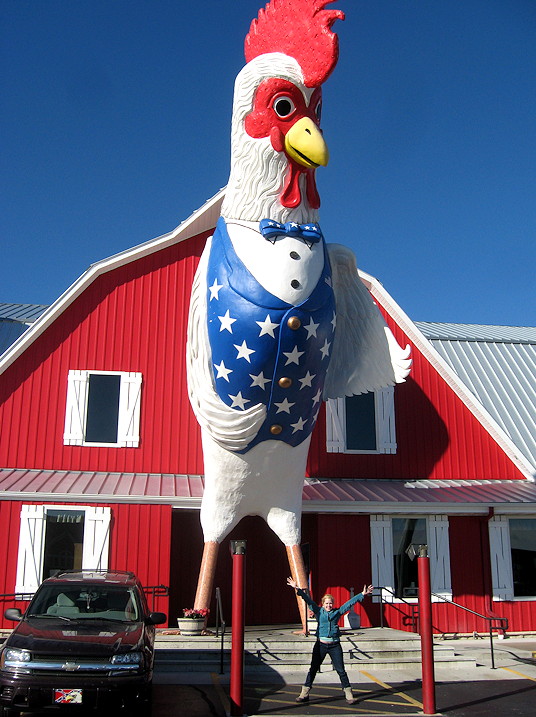 This is me standing next to a bronze statue of a bear just outside the Bass Pro Shop. That’s the bear on the right. 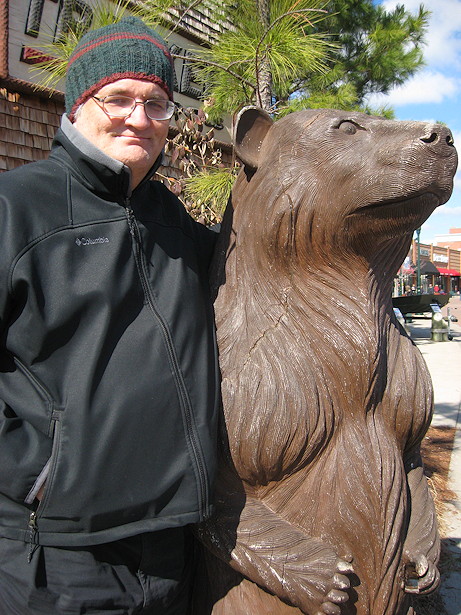