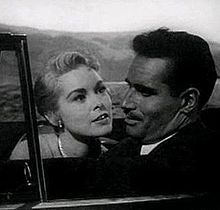 …Dennis Weaver plays a nervous hotel clerk, and Zsa Zsa Gabor plays a strip-club owner. Does this sound like A) A skit on an old Bob Hope special, or B) A classic film noir directed by Orson Welles? Clue: Let’s add Marlene Dietrich as the madam at a brothel and Welles himself as a corpulent, corrupt cop. And that’s Janet Leigh in the photo next to Chuck Heston in the role of his wife. Yes, it’s the 1958 film Touch of Evil, regarded by many as the last of the great film noir productions. I’d never seen the whole thing so I watched it late last night (one doesn’t take in film noir as a matinee). OK, so I’m 55 years late to the party, but here is my review.

This is not a simple film to describe, in part because it deliberately plays against some of our cultural and cinematic expectations. But I’ll get to that in a minute. I should begin by talking about the opening shot. It is one of the most famous shots in movie history; a remarkable moving crane shot over three minutes long that takes us from the planting of a time bomb in the trunk of a car, to that car driving through the busy streets of a Mexican border town and crossing the border into the U.S., to Heston and Leigh strolling down the sidewalk and briefly chatting with the occupants of the car, to the car bomb’s inevitable detonation. You might not notice that it’s one unbroken shot if I didn’t point it out to you… so I’m pointing it out to you. It’s a shot that deserves its fame.

Soon enough, the American cop Quinlan (Welles) arrives on the scene and begins asking questions. Ah, but Vargas (Heston) is a cop too, albeit a Mexican one. Even though the explosion occurred on U.S. soil, the story – and the bomb – began in Mexico, and the two men quickly rub each other the wrong way but are stuck with each other.

I’m going to stop describing the plot in laborious detail now, because one of Welles’ games is that he wanted the plot to be confusing, much as Howard Hawks felt when he was directing The Big Sleep a dozen years earlier. So this is a tension for the viewer, because we naturally try to follow the story in a movie, particularly when the movie feels like some sort of gritty police procedural. But that’s not really what the movie is about. At some point, we realize this and we go where Welles is steering us.

So then, what is Touch of Evil really about? I think it’s about characters and what happens when they bump into each other. It’s also about how we the viewers react when stereotypes are flipped. Note that it was Welles who changed the script to make Heston’s character a Mexican. It was also Welles who changed the setting from being entirely American to a border town. On top of that, it is Heston’s Mexican cop who is the good guy and it is Welles’ American cop who has an air of rancid, pathetic corruption about him. It is worth noting that Welles wore a considerable amount of padding and facial prosthetics for this role, which we might not have guessed as we view the film in 2013 and recall the 1970s’ Welles who became extremely obese.

More than one critic has suggested that this movie might have been thematically autobiographical on Welles’ part. Consider: Quinlan is a man who has been consumed by his past failures and regrets. His propensity for excess has made him a physical wreck, and the once good cop has devolved into a bitter, evil man. Late in the film, a drunk Quinlan asks Tanya (Dietrich) to read his future in the tarot cards:

Quinlan: Come on, read my future for me.
Tanya: You haven’t got any.
Quinlan: Hmm? What do you mean?
Tanya: Your future’s all used up.

Note also that Touch of Evil was the last film Welles ever directed in Hollywood. The rest of his career consisted mostly of half finished projects and films that could never get off the ground. Welles may not have achieved Quinlan’s level of evil in his own life, but he captured the pathetic part.

With regard to Janet Leigh, it is intriguing that she plays the part of a woman who is on her own in an out of the way motel for much of the movie, and that she is ultimately terrorized by unwanted visitors who break in on her and mean her great harm. Two years later, Leigh would appear in Alfred Hitchcock’s Psycho, and one can’t help but speculate that Hitchcock saw Touch of Evil and got an idea.

Ultimately, it is a tricky business recommending Touch of Evil. It has to be recommended in a certain way because of all the things it’s not. It’s not pretty to look at in any conventional sense. It’s not pretty to listen to, as much of the music is intentionally jarring and much of the dialogue overlaps and creates confusion. A substantial amount of the dialogue has clearly been looped, with the typical result that there is often a slight mismatch between the vocal dynamics and the visuals. It’s hard to say much about the acting because it’s hard to separate it from the whole experience – so I suppose the acting must be pretty good. Even Charlton Heston, whom I consider to be an exceptionally wooden and unnatural actor, passes through this film with flying colors. I’ve always had the impression that Heston speaks as if everything he says is in quotes. Maybe it’s not a problem here because we know Heston; he’s consistent if nothing else, so we stop worrying about it pretty quickly and accept him as the good guy amidst all the distasteful, weak, and creepy folks who surround him.

The real pleasures of Touch of Evil require a slight refocusing of one’s perspective to appreciate. They’re in Welles’ direction. I’m tempted to use the word “masterful” but that’s not quite right; Welles made lots of mistakes. He made them because his vision and ambition were always charging ahead of the painful practical constraints of the logistical world. It is a great shame that his personal and professional style never did – and maybe never could – mesh with the Hollywood way of doing business. In the end, it meant that we only got a handful of fully realized projects from Welles, an auteur who showed up in Hollywood a couple decades too soon for his own good.
Collapse