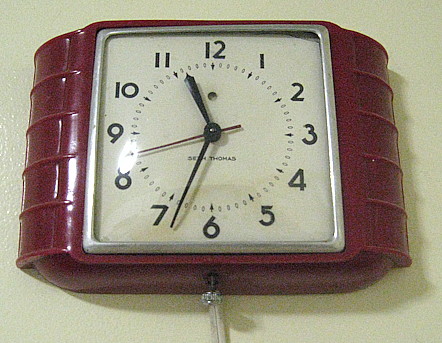 About 25 years ago, CC and I were living in Detroit. We were renting a three-bedroom house in a lousy neighborhood near Six Mile & Mound Rd., but getting a whole house to ourselves for a mere $200 a month was too good a deal to pass up… or so we told ourselves… but that’s another story.

We both worked in theater, so it is probably redundant to say that money was tight. Still, we did have a certain amount of disposable income. It usually got blown on such frivolous items as rent, gasoline, toilet paper, and bleacher seats at Detroit Tigers games. One day, we decided to dispose of some income at the Value Village resale shop on Gratiot (I believe near about 12 Mile Rd.). My sole purchase that day was the clock you see here. It was made right here in the good old US of A by the Seth Thomas Clock Company. It set me back one dollar. You see, it had lost its electrical cord, so there was no way of knowing whether it worked or whether it was simply a stylish mid-century paperweight, so I wouldn’t have blamed the checkout clerk if she’d muttered “Sucker” as I walked out the door.

After departing Value Village, we stopped at a nearby drugstore where I bought a short extension cord, which set me back an additional buck and a half. When I got home, I unscrewed the back of the clock, cut off the outlet end of the extension cord, stripped the ends off the wires, and screwed them into place inside the clock.

Then came the moment of truth – plugging in the clock. I pressed the plug gingerly into the outlet, ready for anything from a shower of sparks to an ugly grinding noise. Neither of those things occurred. Instead – drum roll please – the second hand began to sweep in a clockwise direction. That’s all. I then pounded a nail into a wall, hung up the clock, plugged it back in, and got on with my life.

All I’d really wanted was a clock that reminded me of the clock that hung in my family’s kitchen when I was a kid. That’s why I’d decided to risk two and a half bucks of my disposable income. As for the clock – it has followed me from place to place ever since. It hangs in my kitchen today. And it still keeps perfectly good time, without complaint, and without a moment of service in the past quarter century. As investments go, it has outperformed many a stock I could name.
Collapse