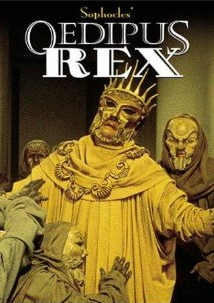 While channel-surfing late last night, I came across a movie I’d heard about but never expected to see on broadcast TV – the 1957 adaptation of Sophocles’ ancient Greek tragedy Oedipus Rex. If you’re a fan of Tom Lehrer’s music, this is the very film he was referring to when he wrote his parody song “Oedipus Rex”, which he proposed as a song that might have helped the movie to be more successful at the box office.

This movie is done in what possibly comes across as a jarringly unusual style, particularly to a modern audience, and particularly to an audience unfamiliar with Greek drama. First of all, the entire production is performed on a small set with few distinguishing features. Visually, it employs a limited color palette and only a few pillars, doorways, and steps. Also, the actors’ faces are never seen other than their mouths, as everyone is wearing masks.

Perhaps most jarring, though, is the acting style of the production. After a few minutes of watching, part of me was thinking, “Gee whiz, guys! You want to turn it down a notch? Give it some dynamic levels?” Every line was being declaimed in a semi-monotonous sing-songy manner. Yet a certain morbid curiosity kept me watching… and then I started to get into it. I began to realize that it wasn’t that the acting lacked dynamic levels; it was that these levels were occurring in different places than what I was used to. It was a little like tuning one’s ears to a new dialect. The style was nowhere near any kind of modern naturalism or contemporary cinematic pacing, which is why this must be hard for a modern audience to watch. Allow me to digress:

When Sophocles wrote this, it was meant to be performed live, in a quasi-religious setting. They were depicting the deeds and words of kings and gods, whose passions were outsized far beyond those of the common man. For centuries thereafter, the acting style of the stage continued to be exaggerated or stylized in ways that would seem unrealistic to most of us nowadays. And why is that? Why do we expect more naturalistic acting nowadays? One of the first reasons was the invention of motion pictures. These allowed us to be practically cheek-to-cheek with the actors and allowed – demanded, even – that they tone down the acting techniques required in a large theater. Then came television, which put this level of intimacy into every home. Additionally, television has usually been a medium that leaves us as the audience physically larger than the show we’re watching. We are no longer guests in their world; they are guests in ours.

All of this has led us down the road of more naturalistic acting over the past century. For us as an audience to now go back and view the acting style of a bygone time, we have to adjust our ears and our expectations or we will miss a lot of what is going on. So it is with this film.

Oedipus Rex was directed by Tyrone Guthrie, one of the titans of 20th century theater on both sides of the Atlantic. The movie was filmed in Ontario, Canada. The cast consists entirely of members of Guthrie’s acting company at the Stratford, Ontario Shakespeare Festival. Trivia: One of the chorus members in this film is a young William Shatner, though I couldn’t identify him by sight on account of the masks, and I never heard a voice that sounded like his, so he may not have any lines other than in unison with his fellow chorus members.

The title role of King Oedipus is played by Douglas Campbell, and I was very pleased to finally see some of his work, since I met him while taking part in a two-day classical theater workshop he ran in 1988. In fact, one of my treasured memories of that workshop is a story he told that referred directly to his role as Oedipus. I am paraphrasing (since I do not possess a photographic memory), but his story went like this:

“We were rehearsing the scene where I enter after my character has gouged his eyes out after learning that he has killed his father and unknowingly married his own mother, who has just committed suicide, all of which had been prophesied to me by the Oracle when I was a young man. I entered with the weight of this unimaginable tragedy wracking my body. Tyrone [the director] cut me off and told me I was all wrong and I should try it again. So I went out and came in again, determined to express all of this. He cut me off again and sent me back to try it again. This happened time after time until I was completely exhausted from trying to express all of that passion. I finally entered completely blank, completely spent, showing no emotion whatsoever, and went about practically sleep walking. Tyrone said, ‘There, now you’re getting it!’ The point is, you can’t play ‘I’ve just caused the deaths of my parents and gouged out my eyes’; it’s simply too horrible. You have to let the audience create the horror in their own minds.”

It was an educational and fascinating weekend working with Campbell, a walking theatrical encyclopedia who had seen and done it all, from London to Broadway to Hollywood to many a touring show along the way. He told many other wonderful stories that you should ask me to recount sometime, and he offered invaluable insights to all of us about our individual work. Campbell died in 2009 at the age of 87.

So in a very roundabout way, I felt as if I had a personal connection to this movie. I commend it to your attention, but with heavy advisement – it isn’t going to speak to everyone. If you’re unfamiliar with the material or the style, it could be tough going. But if you’re up for a glimpse into a mostly lost artistic style, you might want to seek this one out.

A few other random notes: The screenplay was adapted from a translation by William Butler Yeats, and it felt to me as if this film must have been a strategic condensation of Yeats’ original (unless it was Yeats who condensed Sophocles’ original). With a running time of just under 90 minutes, certain parts felt a bit rushed. I can hardly blame Guthrie for doing this (if that’s what happened), as many classical drama pieces are several hours long if performed uncut. Also, I would be remiss if I didn’t mention the marvelous masks created by Tanya Moiseiwitsch. The longer one looks at them, the more expressive they become, particularly when used by such skilled performers.
Collapse