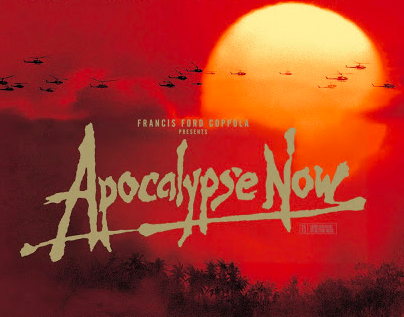 I’m here today to talk about the 1979 film Apocalypse Now. I didn’t just draw this movie out of a hat to talk about; this is actually on the short list of the greatest films I have seen. But in the case of Apocalypse Now, there are far more layers to my appreciation of it than there are to most great films.

The first point I should make is that "great" can never mean "flawless," particularly in art. Part of my fascination for Apocalypse Now actually lies in its many flaws. It’s kind of an epic mess of a film, out of which emerges a moving and unforgettable story and overall experience. This is due, more than anything, to the genius of Francis Ford Coppola.

On an obvious level, Coppola and screenwriter John Milius have taken Joseph Conrad’s book Heart of Darkness, written in 1899, and liberally adapted it to a setting of the Vietnam War in the late 1960s. The novel tells the story of a journey into the deep jungle to rescue one Mr. Kurtz. In the film, Kurtz (Marlon Brando) is a Special Forces colonel who has gone deep into the jungle to fight the war on his own terms. He has surrounded himself with a village of fanatical followers, and Captain Willard (Martin Sheen) is sent into the deep jungle not to rescue Kurtz, but to kill him; or as he is ordered, to “terminate with extreme prejudice.”

The casting was equal parts genius and dumb luck, an example of how we sometimes succeed despite our own bad instincts. We don’t meet Kurtz until about two hours into the movie, and Coppola clearly understood that there would be a built-up expectation on the part of the audience, so he knew he needed an actor with a certain mystique. Regardless of how one feels about Brando as an actor, his mystique was considerable and undeniable.

Coppola’s genius comes in with regard to how he dealt with Brando. When Brando showed up to begin filming, Coppola was dismayed to learn that Brando had become grossly overweight and could not possibly portray Kurtz as the lean, mean fighting machine the screenplay had originally described. On the fly, Coppola decided to reconceive Kurtz as the dissipated remnant of a once great soldier. In addition, virtually every shot of Kurtz is from the chest up and in dim light. Well, it all worked. Coppola had taken lemons and created solid gold.

The role of Captain Willard was originally given to Harvey Keitel. After a couple weeks of filming, though, Coppola fired him and hired Martin Sheen. It seems a curious left turn on the surface. It takes very little imagination to picture Keitel as a military hit man, but Sheen is another matter. There’s something inherently thoughtful, and even tender, about Sheen’s persona. But once again, through either genius or dumb luck, Coppola got it right. Sheen’s persona made him kind of inscrutable and intriguing as a hit man, while his academic air made it believable that he would begin to question the wisdom of his orders as well as the wisdom of the entire wider military operation.

If you’ve never seen Apocalypse Now and are looking to rent it, I have a vital piece of advice for you: Do NOT rent the Apocalypse Now: Redux edition. I consider that version to be for fans only. Here’s the problem: The original film is two and half hours long; the Redux edition, which was released in 2001, is about three hours and ten minutes long, and a lot of that added material was best left out, especially with regard to its effect on the pacing of the film. Now for big fans such as myself, the Redux edition is absolutely fascinating and essential, but the casual viewer is apt to get worn out trying to watch it.

That being said, a few of the Redux scenes are very illuminating. For example, one deleted sequence shows Kurtz talking to Willard in broad daylight rather than in the murky nighttime to which I referred earlier. Seeing Kurtz in that daylight robs him of so much mystery and power that I would like to personally thank Coppola for leaving the scene out of the original edition. Another lengthy sequence shows Captain Willard and his group stumbling upon a French plantation in the middle of his journey from Vietnam to Cambodia. The place is a vestige of the days before American involvement in Vietnam, when it was a French concern. The people living there are French people who have managed to survive, beyond all logic, on their crumbling plantation. They are weirdly lost souls, belonging neither to Vietnam nor to France. It is a fascinating and quietly sad sequence. But I understand why it was left out; the fact is that the movie was already getting pretty long, and this extended sequence does absolutely nothing to advance the story. As I said, for big fans like myself, seeing this is a treat. But for the non-fanatics – beware.

There are many stories about the difficulties of getting Apocalypse Now produced at all. The original version was supposed to have been directed by George Lucas, who planned to shoot it in a quasi-documentary style. But years of delay ensued, and by the time the project came to fruition, Lucas was busy shooting a sci-fi movie called Star Wars, so the project fell into Coppola’s lap. The production spiraled ridiculously over budget, particularly after a typhoon blew away all of their sets in the Philippines. Martin Sheen suffered a heart attack in the middle of filming, a fact which Coppola hid from his studio bosses, since they probably would have shut down the whole production if they’d found out; Coppola opted instead to shoot around Sheen’s absence while the latter recuperated from what was called “exhaustion.”

I referred earlier to the film’s many flaws. Just to single out a few: It does drag a bit in the middle. We’re ready for Willard to get to Kurtz for some time before he finally arrives. I understand that Coppola needed to take his time to build up our sense of being sucked up the river to Kurtz’ compound. It’s a tough balancing act and he doesn’t pull it off perfectly.

And yes, about that sense of expectation in finally getting to meet Colonel Kurtz – it may be that Coppola and Milius set themselves up for failure. In spite of their best efforts, Kurtz doesn’t – and maybe never could – meet our expectations for the power and mystery Kurtz must possess. But if the filmmakers have committed an artistic sin, it is the sin of ambition. Seeing their grand failures makes one realize how unambitious and safe most films are. Coppola goes on the high wire without a net and makes us glad we’re in the audience. And when he falls off the wire and breaks a bone or two, he manages to somehow reappear a moment later, back up there in the rafters, where he continues the show.

That show also includes Dennis Hopper, who shows up unexpectedly most of the way through the film as a photojournalist who has made his way to Kurtz’ village. He seems to move seamlessly through the village as the king’s insane jester, and it is he who greets Willard’s boat as it pulls up to the shore. His presence throws our perception of the village even further off-kilter while injecting a much needed air of relative lightness to the proceedings. Once again, Hopper is the ideal actor for the job, given his known persona, his acting resumé, and his square-peg presence. We could debate the casting of the other leads here, but Hopper stands alone.

Of less significance is Robert Duvall’s turn as Lieutenant Colonel Kilgore. Yes, he utters the movie’s most famous line, “I love the smell of napalm in the morning,” but he isn’t quite as essential to the movie as the other actors I’ve mentioned. Kilgore is in only one sequence, a memorable one to be sure, showing an attack on a Vietnamese village and its aftermath. I’m glad it’s in the movie; it establishes some of the cruelty and other mind-sets that go into conducting a war, and for simple entertainment value, it’s probably the high point of the film, though it does little to actually advance the story. Still, Duvall took a showy role, played it for all it was worth, and completely deserved the Oscar nomination he got for his work.

Although I was only 20 when Apocalypse Now debuted, I was keenly aware that it had won the Palme d’Or at Cannes, so my friend Ed and I saw it the week it opened in Detroit. Supposedly, the print we saw was the same physical print that had been screened at Cannes, but I can’t confirm that. I saw it several times more in the theater and have picked it up in various TV showings in the years since then (though I dread watching it with edits and commercial interruptions). It’s become an old friend of mine; a messy but wonderful old friend who still has the same problems as when we first met decades ago, yet we’ve remained close.

Postscript — My friend Ed and I made several amateur films when we were in our late teens, using his Super-8 silent film camera. One project we talked about but never filmed was going to be our own version of Apocalypse Now. Ed was working as a movie theater usher/manager at the time, so we were going to use his theater to film the story of a renegade theater manager whose “methods have become unsound” (to quote a line from the film we were parodying). The renegade manager only shows weird, independent, or foreign films and he has attracted a clientele of fanatically devoted moviegoers. An usher from another theater is sent on a journey up Jefferson Avenue to terminate the manager’s command. We had an excellent reason not to ever film it: a lot of what we were imagining involved clever dialogue that parodied Apocalypse Now’s dialogue – and as I mentioned, all we had was a silent film camera. And that’s a good thing. The project held every promise of being a film that Ed and I would have giggled incessantly about, but that probably no one else would have appreciated. All we might have expected from our audience would have been to hear them quietly murmuring, “The horror… the horror.”
Collapse