For as long as I’ve lived in Chicago, the notion of a trip to Illinois’ capital city has been rolling around in my head. I’d spent a day there many years ago when I was on tour with The Wizard of Oz. That was the memorable day when Karianne, our Glinda the Good Witch, fell ill and was replaced for the day by chorus member Shawn. But there was no time for sightseeing that day, even though I’ve always enjoyed touring state capitals. Last weekend, the long-dangling shoe finally dropped in the form of a two day trip to Springfield, Illinois.

[NOTE: In a grievous oversight, I neglected to pack my good camera for the trip, so photos were few in number and taken with my iPhone. I’ve done what I could to gussy them up and make them look presentable]

Ah yes. The second week of December is a fine week to think about driving long distances on pleasure trips in the northern latitudes. No, I’m serious. You’re avoiding crowds in a big way and you’re getting lower rates on hotels. And when you visit tourist sites, you’re going to park as close as you please. That being said, there is a potential downside to traveling in the severe off-season. On this trip, we got a good look at the butt end of that downside.

Here in Chicago, we’ve already seen several substantial snowfalls. But Springfield, a three and a half hour drive south of here, experienced its very first snowfall of the season on the evening we arrived. The flakes were just beginning to fall as we pulled into town. It was no big deal, we thought — three to five inches in the forecast; no plans that night other than finding a nearby dinner; the city will be plowed out by morning and we’ll get on with our plans.

By the time we were setting out to eat, several inches of heavy, slushy snow had fallen. Our dinner plans were simple — we could see a huge Bob Evans restaurant down the road from our hotel, so we decided to walk it. There were no sidewalks and our feet quickly became wet and cold while we dodged cars along the shoulder of the road, but the Bob Evans beckoned before us, lit by candlepower comparable to that of a small airport, shining through the frosty air like a gigantic red and white Santa Claus with a sack full of pancakes. Upon arriving, we found the display to have been illusory, for the restaurant was closed. In fact, it had been closed for some time for remodeling and was due to have its grand reopening the following day — which was why it was all lit up. Our dampened, furrowed brows thereupon swiveled around and we scanned the highway for alternatives. We immediately discerned that the only nearby option was the Denny’s across the street.

This was where our luck began to change. Though neither of us had much enthusiasm for dinner at Denny’s, the meal far surpassed our expectations and the wait staff was as personable as one could wish for. In fact, the following morning, we returned there for breakfast and found that the night crew had erected a snowman. The picture below demonstrates our affection for that particular Denny’s: 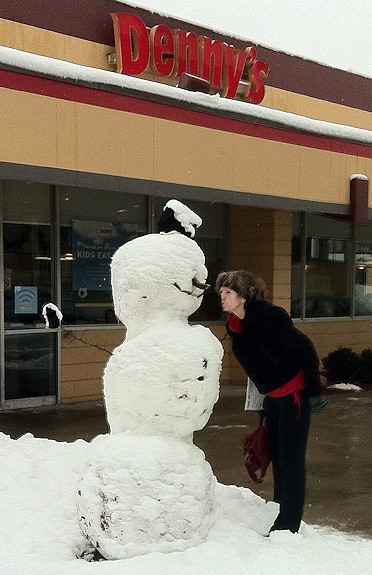 The following morning, we looked out of our hotel window to see that the snow had mostly subsided and the main roads had been cleared. Our day was to begin with visits to a couple of small, private museums, beginning with the Daughters of Union Veterans of the Civil War Museum. Its website advised us that the museum “…contains medals, photos, actual battle swords, currency, drums and other musical instruments, books, documents, a Union soldier’s uniform, and dresses from the Civil War era.” But when we arrived, we found that the weather had apparently kept away the people responsible for unlocking the place and welcoming visitors.

No matter – there were plenty of other interesting historic sites to visit in Springfield. We proceeded to the Grand Army of the Republic Memorial Museum, described as being “…full of Civil War memorabilia including artifacts, documents, and historically significant items that have been donated by veterans’ relatives.” Sounded pretty cool! And maybe it is. It was also closed without announcement or explanation. It was becoming apparent that the first snow of the season had left many locals disinclined to leave their homes. Meanwhile, we few hardy tourists drove around on the cleared roads quite unimpeded.

It was time to go for the heavy artillery (as General Grant might have put it). We headed over to the Lincoln Home National Historic Site. Unlike these modest, privately owned facilities, the Lincoln home is run by the National Park Service. It is a hugely popular tourist destination. And it was open! And there were no lines!! And it was completely awesome!!! I took this picture of it: 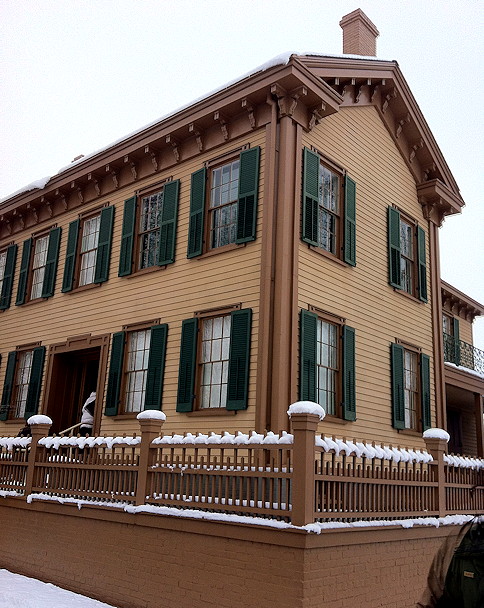 If you know me very well, you might know that I rarely speak publicly about the value and meaning of our country’s history. And I’m not going to make any attempt here to link Abraham Lincoln’s words and deeds to the U.S.A. of the 21st century. That exploration would be complex and nuanced and has no place in this simple entry. I will simply report that there is a power to standing in the very rooms and standing by the very desk where Lincoln contemplated some of the most important thoughts and words that any American has ever conceived. The whole place is in a remarkable state of preservation and restoration, making it very easy to picture Abe and Mary and their boys in their day-to-day lives. I wish every American could visit there and feel the pride and inspiration that is engendered by contemplating the life of a backwoods Illinois lawyer who rose to where he was needed. CC and I walked out of there feeling as if our trip was now a complete success, regardless of anything else we might or might not do during this weekend. I was even tempted briefly to go back the following day and tour it again.

Another thing you may know about me is that I’m not into cemeteries. They strike me as a waste of good real estate. I’m not trying to start an argument or cause trouble, but that’s just how I feel. So it was with some hesitation that I agreed to proceed to Springfield’s Oak Ridge Cemetery to visit Lincoln’s tomb. But — and I’m surprised to be saying this — I’m glad I went. And I’m glad I was there in the off season, when there were literally no other visitors and the tomb itself was fringed with snow from the previous day. As CC observed, it was appropriate because winter is the dead season. It is a beautiful and contemplative place, as you may see in this photo: 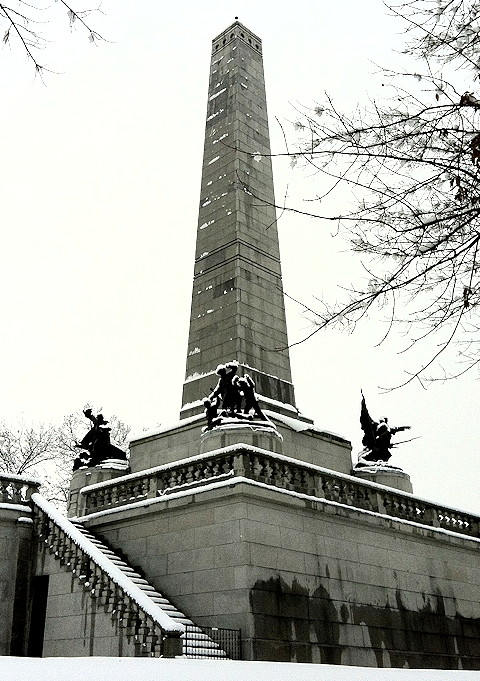 To give you a little perspective, the central obelisk is 117 feet high. The afternoon was getting on and there wasn’t much good light left on this short, overcast day, but we walked around in the icy air until the unshoveled walkways forbade further progress. Speaking of perspective, I have a piece of advice: If you should go to Springfield yourself, I recommend you do what we did and visit the Lincoln home first before going to his tomb.

The next morning, we visited the Lincoln Library and Museum. They are actually two separate facilities across the street from one another, but they are as different as can be. The library is primarily, well, a library. If you’re looking to do research on Lincoln, that’s where you’d want to be. There are a few small galleries and some interesting wall hanging exhibits there, but it’s definitely the Grownup Table compared to the museum across the way.

The Lincoln Museum is going to be fun and interesting for a certain type of tourist. For another type, its $12 admission ticket may become a small regret. The centerpiece of the place is unquestionably the holographic stage show. It is far and away the most technologically impressive holographic stage show I’ve ever seen — the theme parks in Orlando pale by comparison. So if you’re into stunning high tech wizardry, there’s that, though the content of the show doesn’t break any notable ground in the way of historical education or illustration.

Most of the rest of the museum consists of galleries, or perhaps I should say rooms, from different moments in Lincoln’s life. The most consistently impressive part of those galleries is the mannequins of Lincoln, his family, and other historical figures. They are artfully executed and strikingly lifelike.

One of the biggest disappointments of the Lincoln Museum is the paucity of actual historical artifacts. Though there are a few here and there, we were mostly looking at reproductions of artifacts. You may think I’m being a little fussy in carping about this, but I think that when you’re in The Lincoln Museum in Springfield, Illinois, there is an expectation for more actual historical material than what is actually on display. This place is more like the Honest Abe Theme Park or Abe Lincoln, the Traveling Extravaganza. As such, I suppose it makes for a fine introduction to Lincoln’s life and work — and there are some terrific visuals here and there, make no mistake — but its ambitions are centered around breadth and striking visuals rather than depth and insight. To the extent that Lincoln himself is on display, it is much more a display of Lincoln the myth and Lincoln the cardboard cutout than Lincoln the man. Bottom line: I’m glad I went, really I am. There’s some cool stuff I’m glad I saw. But unlike the Lincoln Home, I don’t think I’ll be returning.

Aside from some shopping that needn’t be detailed here, that was our Springfield trip. We’re awfully glad we did it and we hope to go back someday soon, perhaps after the groundhog has given everyone the go ahead to emerge from their respective burrows and reopen their shops.
Collapse