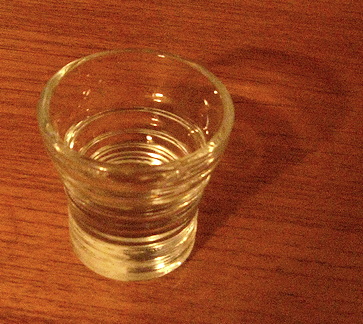 I’ve always liked this piece – an elegant hunk of antique glass, molded in a more refined era. It has sat on my dresser for over 20 years. Every time I look at it, I think of Fritz, who is the shot glass’ rightful owner.

If Fritz is still alive, I’m sure he has no idea that I have this, or that the glass itself still exists. If he has any memory of it, he probably assumes that it was destroyed in the gigantic inferno that destroyed most of his belongings. Let’s sift through the ashes and uncover the reasons why I am the custodian of this artifact.

In the early 1980s, I was working at Detroit’s Attic Theatre. In addition to acting in quite a few of their productions, I was the bookkeeper for the company. It is a small miracle that the theater survived my tenure as bookkeeper, but that’s a story for another time and a few refillings of this glass.

In 1983, the Attic produced John Guare’s play Lydie Breeze. I played the small but vital role of a suitor who makes his one and only entrance three pages before the end of the play. I am proud to report that more than one published review singled out my performance for praise. More importantly, at least with regard to this essay’s topic, I was in charge of collecting props for the show.

[Sidebar — Since 1983, John Guare has substantially rewritten Lydie Breeze, so any remarks I make about the play’s structure or characters may not apply to the script as it presently stands.]

Among the items I needed to come up with as Prop Master were an antique Ouija board and a glass that the characters in the play would use to move over its surface. I employed my sister Helene to make the Ouija board. She had a flair for calligraphy and, for a modest fee, she carefully painted all of the requisite characters onto an old board pulled from my father’s stock of lumber.

The shot glass was another matter entirely. I tried out quite a few different items without success. It needed to have a smooth rim (since it would be used upside-down) and it needed to have some heft in order for it to be pushed evenly over the varnished surface of the Ouija board. This was where Fritz came in.

Fritz ran an unusual business. He was a lifelong collector of stuff, which is a polite word for junk. He owned more junk than anyone I have ever met – and that is no small boast given some of the collections I have seen. Ah, but organized junk can become something else entirely. In Fritz’ case, it became a props and interior design company. His warehouse contained several model rooms showcasing different historical eras. For example, one room was completely outfitted as a 1940s business office. Everything was there – desks, chairs, lamps, wall sconces, telephones, wallpaper, hat racks, doors, windows, right on down to pens, pencils and stationery. Other rooms targeted specific eras of the early 20th century in similar fashion. It was stunning to realize that everything one was looking at was genuine from the era and was completely functional.

Beyond the showrooms was the dimly lit floor of an old warehouse that had begun life as a manufacturing facility. Fritz’ floor space was equivalent to that of a large supermarket and was crammed with everything imaginable and unimaginable, even including an antique operating table and an electric chair used for executions.

Fritz had an established relationship with the Attic Theatre and with various production companies around town as a source for incomparable prop rental. Full disclosure – I recorded my first radio commercial for Fritz’ gallery. In it, I imitated the voices of Humphrey Bogart, Boris Karloff, and Sydney Greenstreet. It was, in all honesty, an abomination, and I’m eternally thankful that Fritz couldn’t afford to air it very much. If I am fortunate, no copies of this recording still exist.

When I went to Fritz’ place and told him what I needed, he literally pointed me towards the warehouse floor and sent me off on my own while he attended to other matters. It was grand fun, never knowing what the next drawer or the next cabinet might hold. I could have happily spent the entire day there, and it was a tribute to my self-control that I was able to walk out of there a half hour later with this shot glass in hand. I must note this in all fairness: Lydie Breeze is set on Nantucket in the 1890s. This shot glass is of a style several decades after that. So shoot me. It was the right size, the right weight, and it slid perfectly over our Ouija board. If anyone in the audience was that focused on our shot glass, then the actors weren’t doing their jobs.

After Lydie Breeze ended its run, props and sets were disassembled, stored, thrown away, or returned to the people from whom we’d borrowed or rented them… except for this shot glass. It somehow fell through the cracks. I’m sure Fritz didn’t miss it; he had thousands of other items to keep track of; he wasn’t going to lose sleep over this bauble.

And then… maybe a year or so later, disaster struck in the form of a fire. There were other businesses that rented space on other floors of the warehouse. At least one floor contained a large collection of priceless antique cars. I’m told that the wooden beams that held the building together had soaked up a lot of grease over the years, so once the fire got going, the whole place went up. In the newspaper the next day, a veteran firefighter called it the biggest fire he’d seen in his whole career. When I was able to get close to the site a couple weeks later, it looked as if the sidewalk in front of the rubble had melted. I don’t even know if that’s possible, but that’s what it looked like. Fritz had apparently been in the building when the fire began on a lower floor, and it was spreading so quickly that he had to run for his life and had no chance of saving any of his stuff.

I am probably not doing justice to the level of devastation caused by that fire. It was the one time in my life when I felt a tiny twinge of insight into what a war zone might feel like. Things that you assumed would always be there – big monolithic structures that seemed impervious to the vagaries of nature or the follies of mankind – are suddenly gone, utterly gone, taking with them a chunk of cultural heritage that cannot be rebuilt. And that’s just coming from me – someone who’d only been inside the place maybe three times. I cannot imagine how Fritz felt about it.

I’ve heard that Fritz got back into the business sometime after that. I don’t know whether he had stuff stored elsewhere to get him started, or whether his collecting acumen simply kept chugging away. I never saw him again after the fire. If he’s still alive, he must be getting up there in years, but if you’re reading this, Fritz, drop me a line if you’d like your shot glass back. I mean, I’d be happy to keep it right where it is, but I’d understand completely if you wanted it.
Collapse